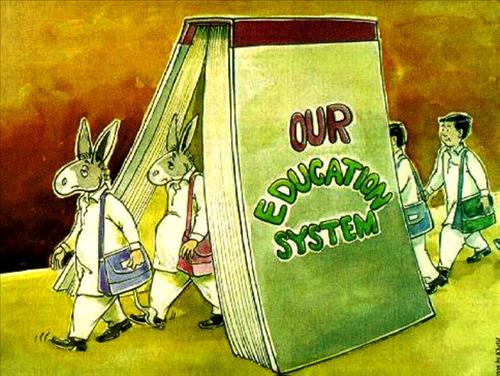 Here is the proof. Go to the best school of any city in India and pick the (so called) smartest kid in that school. Ask him about Organic Chemistry and he will spell out entire chapters. Ask him about Football, he will be able to tell you which player plays in which county and who is the coach. Ask him about Bollywood and he can tell you what Salman Khan eats for breakfast. Now, you ask him what will you do for the rest of your life, and he cannot even say 5 sensible lines i.e. lines which a 10 year old will not know. I have done this experiment with over 15,000 kids across schools and colleges in India and the best I have ever heard is 4 lines.

The Education System in India is a method of systematically destroying one’s ability to think. Kids are so bogged down with amassing information that they are not even exposed to the activities of thinking and introspection. Should it change? Yes. Will it change? Most likely No. If kids are taught how to think, why will they grow up to vote for caste, religion, color etc. Which political party would want to discuss policies, issues, and significant matters with their vote bank? The political system would never allow the education system to change. My father used to discuss about issues with the Education System in India, now I am discussing the exact same issues and I am sure my kids will also grow up and deliberate on exactly the same issues.

So are the kids coming out of the Education System in India doomed? Most probably. More than 50% are just sheer unemployable and the remaining have very basic skills. Average maid salary is actually higher than average B Tech salary.

Is there a way out? Yes but it’s a tough one. It is very unlikely that there will be a fundamental shift in the Education System in India in the foreseeable future. The only option remaining is to motivate kids to think. They are not going to think independently and introspect about Organic Chemistry. However, they may think about their Career. It is rather sad that kids coming out of the Education System in India need to be convinced that they need to think about their Career.

LifePage the world’s most evolved online Career counselling platform is helping kids across the world to become more aware of various Career possibilities and take informed Career decisions. Alas, a system which originated in India and has over 1 lakh 40,000 users actually has more than 30% users from countries which motivate their kids to think and to introspect, unlike the Education System in India which ensures systematic destruction of one’s ability to think.